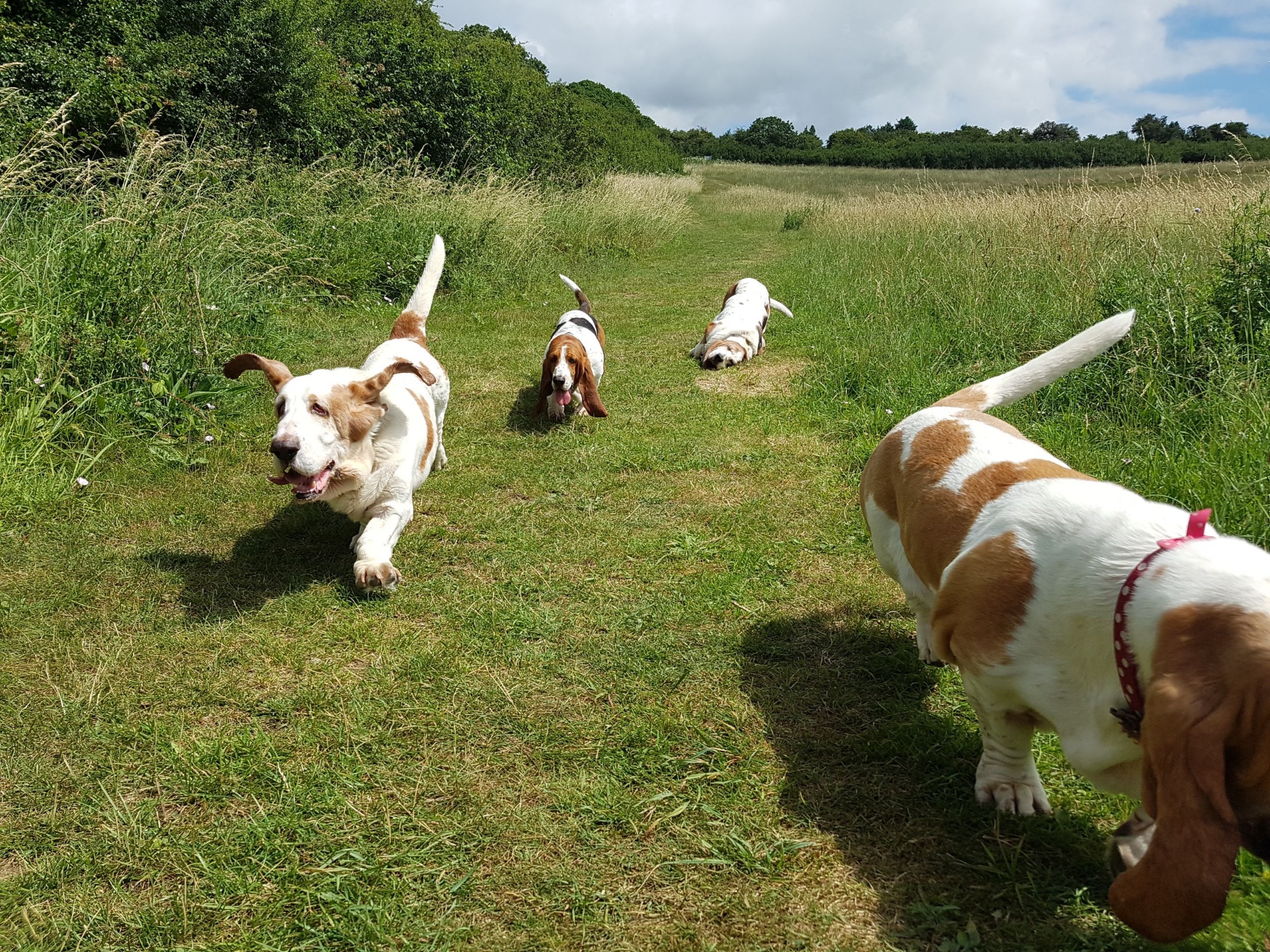 So, with what seems like a blink of an eye, another week is almost over.  I remember as a child how it seemed to take forever for the Summer Holidays to arrive but here we are, with just a couple of weeks before my least favourite time of the year, the 6 week’s school holidays.  I know I’ve turned into a grump as an adult but honestly this is any Dog Walker’s worst nightmare.  Picnics and children everywhere!  The beach is a no-go, certain parts of the downs are off-limits along with local parks and beauty spots.  A pack of dogs and a picnic are not a good mix.  You know the worst ones for ruining picnics? Yes, my 3 Bassets!  I need to write a book for the amount of times they’ve ruined a picnic, BBQ (enter any event involving food here!) but I’ll just recount one occasion to you.

One Sunday afternoon along Ferring Seafront, Mr Buddy-Love who at best goes at a snail’s pace on most of our walks,  took off at break-neck speed at a pace that Usain Bolt would be envious off.  He sped off onto the stones, leapt over a breakwater and in one movement with his mouth open mid-jump stole some burgers that were cooking on one of those instant BBQs. I literally don’t think they touched the sides and must have been red hot, which he didn’t seem to care about. The poor family concerned and a rather embarrassed Mr Furry looked on in amazement at him having devoured them in one bite.  Obviously, Mr Furry apologised profusely and offered to replace the burgers or give them some cash.  Fortunately, the family found it funny and explained they’d finished eating and were merely cooking up the burgers to take home.  As I said, this is one of many occasions where that Hound has caused mayhem……..a book to come in the future!  Peach is no angel either as she once appeared from behind a rather large picnic basket looking like the Joker from Batman as she had helped herself to a huge slice of melon that had wedged between her teeth! Here’s a picture of Buddy-love with a slice of bread he’s just stolen off the kitchen worktop (as I said one of many!!) 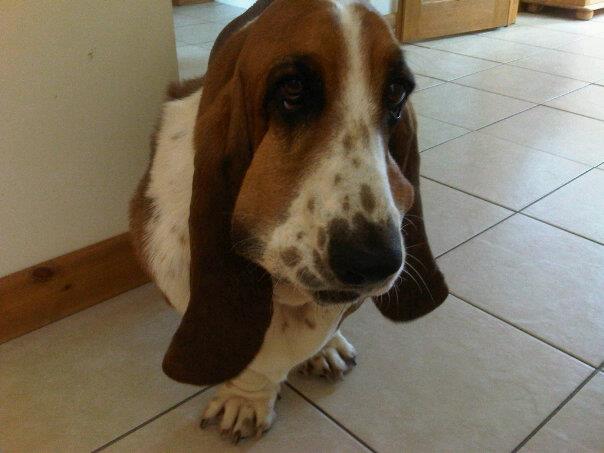 I wouldn’t mind so much if they weren’t fed on top quality meat but they are.  Much to the amusement of my local butcher who laughs once I’ve finished ordering all the best for the Hounds, the only money I’m left with will buy me a couple of sausages for my own dinner if I’m lucky!

Talking of speed, I was looking back through some old photographs from 2010 and found one of our Lally.  I began walking her every week back in August of that year and still walk her weekly now.  As I see her every week, I hadn’t realised how much she had changed in that time and it made me upset to think how quickly dogs seem to age.  Why can’t they live forever?  It is so unfair that they’re not here for very long.  Call me sad if you like but that is why I choose to spend as much time as I can with my dogs, they’re just not here long enough.  Indeed, one of the very reasons I chose to start this business with my redundancy money was so that I could enjoy spending time with my own dogs as well as everybody else’s. How lucky am I?  Again today, looking at Walter the puppy who I began walking weekly in February, I’m amazed he is growing so quickly and each week is looking less and less like a Basset and more and more like a Cocker. 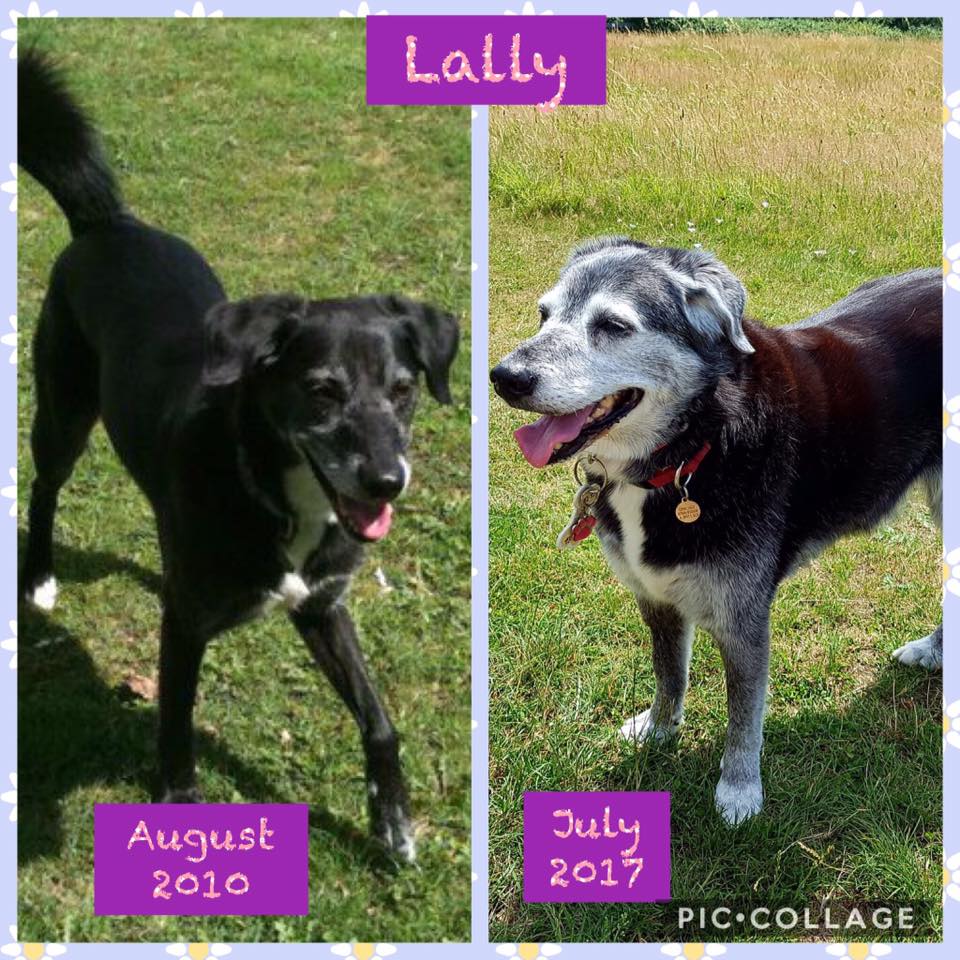 Anyway, enough nostalgia for now.  With regards to this week’s walkies, again it has been quite quiet as we have had 4 of our regular walkers off enjoying their holidays.  So, the poor Furry Hounds have had more walkies than normal!  We also had little Lola re-join the pack today.  She used to come out 3 days a week up until last August when she hurt her knee and had to have a rest.  As 3 days a week is probably a bit too much for her now, she’s going to join us for 1 day a week from next week and see how she gets on.  It’s such a shame because she loves being in the pack and was very happy to see some of her old friends again and meet some new ones.  It was a hilarious moment when she met Chewie (also a Shih Tzu). It was like love at first sight! 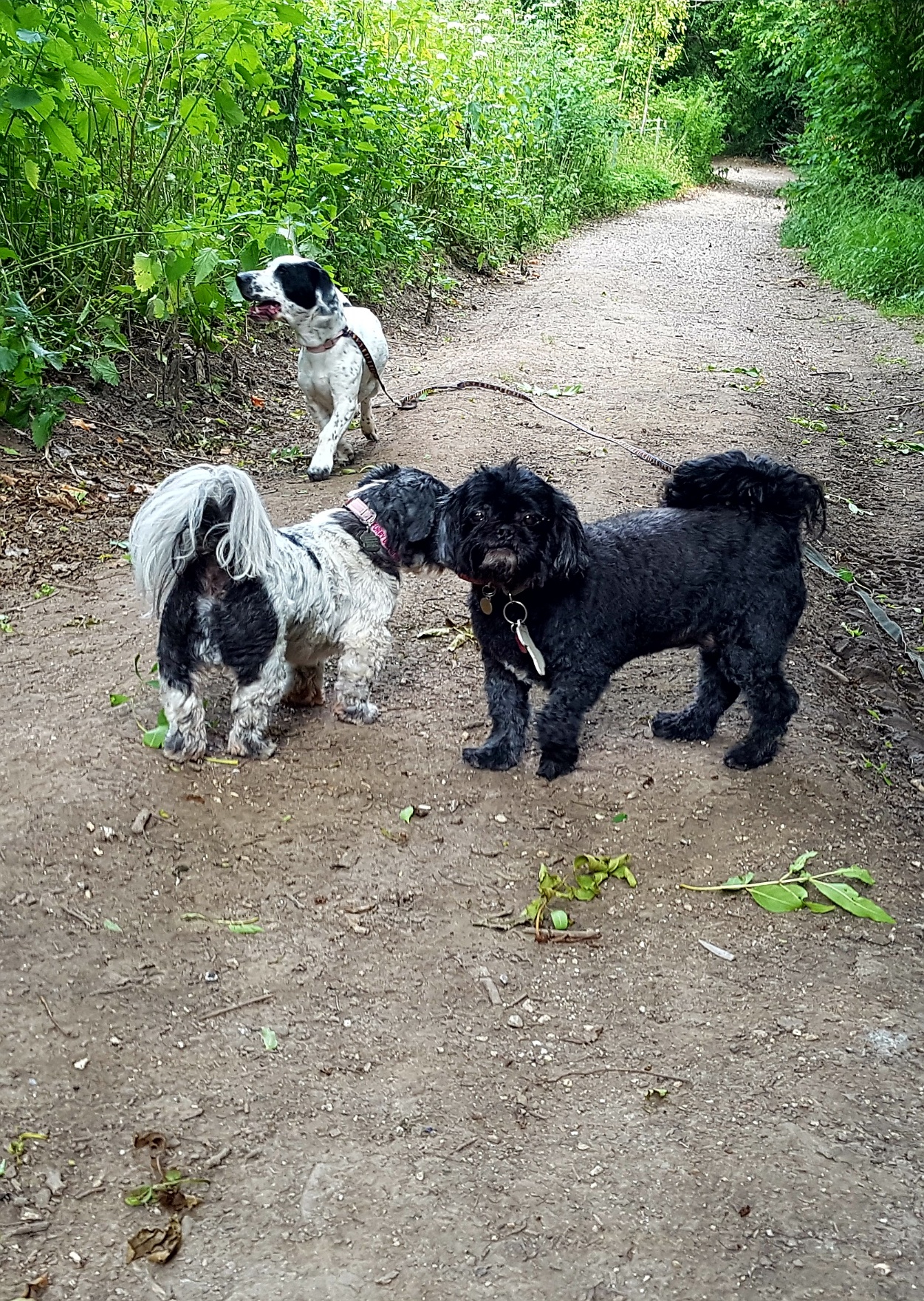 Grooming is as busy as always and I am amazed and delighted at the diversity of it. I go from little Ted a tiny Yorkshire Terrier this week to big Brussels the Airedale, King of the Terriers, who is a total gentle giant.

I had an interesting conversation with an owner this week about ear plucking.  I’m sure she wouldn’t mind me sharing this with you.  Her dog has had recurrent ear problems and the Vet had advised her it was not helped by the amount of hair in her ear canal.  He had told her to ask her Groomer, namely me, to get deep into the ear canal and pull out as much of the hair as possible.  I explained to the owner that I was not comfortable doing this.  Not least because a few years back, the RCVS (Royal College of Veterinary Surgeons) had written a paper explaining that Groomers shouldn’t be doing any invasive procedures like ear plucking and anal gland expression (Which we’ll talk about separately) as these procedures are considered Veterinary procedures.

I explained to the client that if the dog is clearly in pain with ear problems, there is no way I’m going digging into her ear canal to pull hair out.  How likely is that dog going to want to come back for grooming next time?  With a good few years of grooming required, I would prefer she hated the Vet or Vet Nurse for doing it over me?  Also, my insurance is unlikely to cover me if I cause further damage to an already inflamed ear doing something that I really shouldn’t be doing.

Fortunately, the client completely understood my position and said she would go back to the Vet and ask them to do it.

I’ve looked into booking a weekend away later in the year at the Westleigh Bed & Breakfast in Devon that I was given details about at Paws in the Park last weekend.  Although the place looked amazing, it just isn’t going to work for us as the bedrooms are on the 1st floor.  Stairs with Bassets is a recipe for disaster especially in the middle of the night. So instead we are looking at Saunton Beach Villas (www.sauntonbeachvillas.co.uk)  which are a group of properties right on the beach in North Devon.  They have no limit on dog numbers, certain periods of the year dogs go free and all accommodation is on ground level.  So, fingers crossed we can secure a booking.  I hope my Hounds realise how lucky they are?

No Doggie Days Out planned this weekend but I myself am off to a concert Friday night and a festival on Saturday so Mr Furry is on Hound-sitting duties.  He always asks me how he can look after the 3 of them.  I guess I take for granted just how difficult the Trio of Trouble really are.  I will just tell him to avoid anywhere with picnics, BBQs or any other food-related event and he’ll be fine.  Sunday sees me visiting the 2 Guinea Pigs; Cocoa and Caramel to give their hutch and run a good clean out before their owners return from holiday and I commence my twice daily visits to see one of my favourite Moggies; Esme the Siamese. Busy, busy, busy!

Enjoy your weekend whatever you’re doing and give your doggies an extra special big hug from me.

Sally is fantastic with our dog Doug. he has the best time on his walks, and I know he is safe and well looked after and given plenty of attention. He loves the socialisation with the other dogs and the homemade easter and christmas treats. I never worry when he is out with her and he always comes back well excersised. Such a lovely service for our pooch!!!
Laura-Ellen Topliss
Our dog Honey loves Sally, she's always so excited when she sees her and Sally does an amazing job, Honey comes home smelling so gorgeous, looking so perfectly trimmed and her fur so soft. Couldn't recommend Sally highly enough xxx
Louise Olney
Sally is fantastic, sadly we lost our dog last week however I would highly recommend furry godmother to anyone. Our dog wasn't very good with other dogs, sally made sure he wouldn't cross over with other dogs being groomed and also made sure he wouldn't see her dogs. Thank you for all the washes you gave Henry he use to love going to the poochie parlour and seeing you
Helen Lawrence
Sally is one of the few people I would trust my dog with, both for her fun filled walks and for her amazing grooming skills. I know my dog would be made to feel loved, safe and very comfortable during the whole grooming process. Keep up the great work Sally you are one in a million
Sharon Terry
Thank you so much for grooming Diesel & Fleur they look fabulous as usual - I highly recommend Sally at Furry Dogmother she always gives the dog that special touch, look forward to them coming back to see how they look. Sally is a great all rounder with all breeds ...... Karen Owen Paws 4 Walks
Karen Owen
Sally is reliable fun and the boys love her. She always tries to help out with extra walks with our boys whenever she can. A truly lovely lady, we are so delighted to have her to walk our boys. (Mary and Gill)
Mary and Gill
My dog Charlie loves his grooming experience. Sally collects him in the Furry Dogmother van and drops him back home afterwards. He comes back looking very handsome and smells wonderful. I find Sally very friendly and helpful. Sally also offers other services which I will use in the future.
Louise Tanner
I love it when my 2 Shih tzus go to Sally they look and smell gorgeous. Will always send them there.
Sabine Flack
We have just had our first grooming session for Bunny, our nine month old Mini Schnauzer with Sally. We were absolutely delighted with the results. Bunny looked fantastic. I took her for a walk later the same day, and carried her over a slightly muddy patch so as not to spoil her look! Very importantly, when we picked Bunny up, she was clearly happy, and not distressed in the slightest. Great work - Bunny will be back!
Derek Novell
© 2022 Furry Dogmother
Our website uses cookies to give you a better viewing experience, please click accept to continue.
I Accept Cookies I Decline