I was very lucky to have a rare day off on Friday to celebrate my Birthday and even though the predicted forecast looked awful, the sun shone for me.  Me and Mr Furry decided to take the hounds to Sheffield Park Gardens near The Bluebell Railway which is part of the National Trust.  There are a few good walks around the grounds but dogs need to be kept on the lead due to cattle.  To be honest, it is safer to leave my hounds on leads near cattle, not because they would chase them but because it is a prime opportunity to roll in cow pats!  As it was, Mr Buddy-Love did a good job of feasting on sheep poo!

The Tea Rooms are lovely (although a little pricey!) but allow you to take dogs inside but, as it was such a nice day, we sat outside.  Bizarrely, you can only take dogs around the formal gardens from 1.30pm onwards.  I had visions of all these dogs sitting outside looking at their watches and then on the strike of 1.30pm a call of "Release The Hounds!" and then carnage.  Funnily enough we were sitting outside along with other dog owners waiting for 1.30pm but, no call was heard!  I can only assume it is because the gardens are perhaps quieter in the afternoons?

I do like the fact that more and more National Trust properties and indeed other tourist attractions are beginning to realise they are missing a trick if they do not allow people to take their dogs with them.  What annoys me is that there are no ludicrous restrictions on children but my dogs wouldn't pull up plants, trample over the gardens or block the small pathways and bridges to take "group selfies"!  It also makes me angry when I see places display signs "no dogs allowed" but "families welcome".  Well my dogs are my family and in a lot of cases, they are better behaved than children!  They will quietly sit under the table while we are eating yet I've been in places where children are absolutely running amok and ruining the experience for other guests while their parents seem ignorant to their torrant behaviour!

On holiday in Cornwall earlier this year, I found my favourite place in the World.  A huge notice on a local village pub door stating that they had no licence to allow children in the pub but that dogs were allowed everywhere!  Plus, they had bowls of dog treats on the bar!  This is the kind of place I would like to run one day!

On Saturday I was the Judge at a Pet Show for the Jamie's Wish Charity Fun Day in Littlehampton.  It was, as expected, extremely difficult.  I wanted to give every dog a prize as they were all worthy but of course, I couldn't.  Mother Nature wasn't so generous to us and literally the heavens opened as we were called into the ring.  The spirits were by no means dampened though and in true British style, we carried on regardless.  I believe the day raised over £2000 so despite the awful weather, it was well worth it.

Sunday saw us travelling to Berkshire to join in the South of England Basset Hound Club Fun Day.

It is always guaranteed to be good fun with hounds of varying shades of fur and size looking totally enamoured that their owners have made them dress-up in ridiculous costumes!  I chose not to put my hounds through the fancy dress rigmarole this time!  Peach and I came 4th in the best 6 legs, Daisy got 3rd for best rehomed hound and Buddy-Love scooped his fill of prizes by coming 3rd in best veteran (hound over 7 years old), 1st in best 6 legs (he was on loan to another owner who didn't have their Basset with them!) and he won the trophy and 1st prize for the hound the Judge would most like to take home.  Of course, in true Buddy style, he takes it all in his stride, lying in the middle of the floor puffing his cheeks out looking totally bored!  He only perked up when he could delve into the lucky dip basket to choose a prize and of course, he chose something to eat rather than a fluffy toy or ball!

We've been as busy as always with our regular grooming visitors. 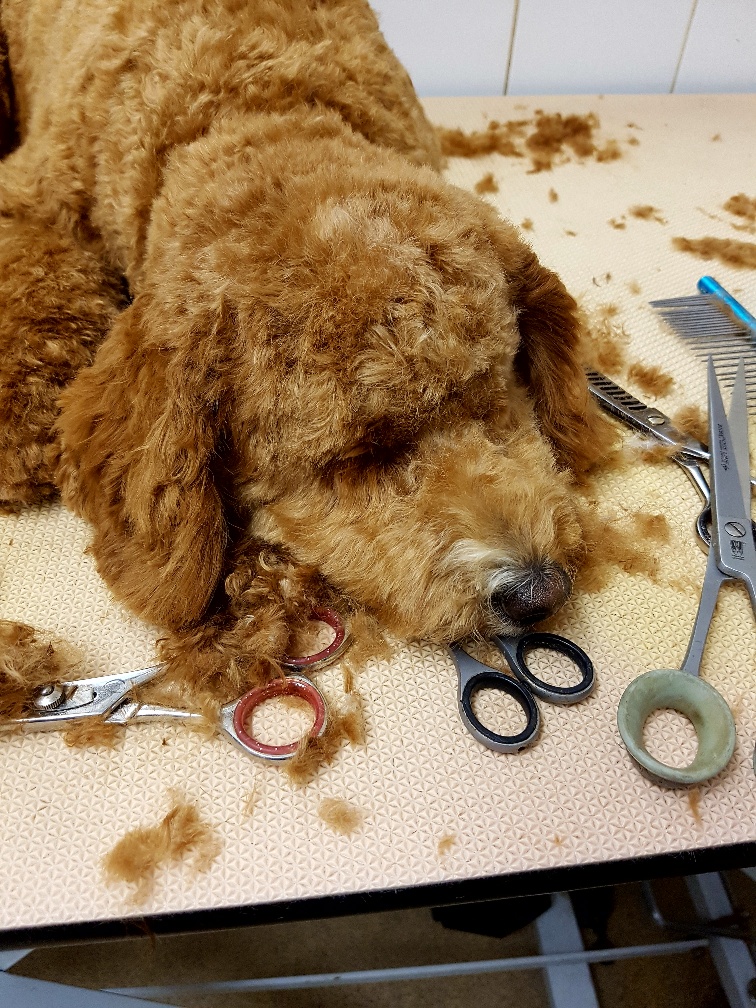 Monday was sleepy dog day they must have all been recovering from the weekend!  Little Hattie the Cockerpoo starting nodding off as I was scissoring her face and Alfie the Saluki had to be dragged out of his bed to come for his regular pamper and continued to yawn all the way through. His owner assured me he'd just had a busy week........I know the feeling guys!

Walkies is back to normal this week with all our regulars back from their holidays although we are missing little Chewie who has a skin condition that he's having treatment for.  We have been playing dodge the puddles though as again in true British style, the school holidays begin and the weather takes a turn.  At least it means when it rains, there are less people around so we are grateful for small mercies!

On Thursday, we are preparing for our house guest to arrive.  You may remember that last year we had little Lily Basset come to stay for a holiday?  Strictly speaking, as you know, I don't offer home boarding but, we did this last year as a favour for a friend who normally has Lily to stay and she enjoyed it so much and fitted in well with my hounds that, she's coming back for her holidays again this Summer.  We have lots of Basset themed things lined up for her holiday, including meeting up at the weekend with some friends of ours who also have Bassets for a walk along the beach in Seaford.  I'm told this walk ends at a very good Tea Rooms which of course, is extremely important!  All good walks must end at either a Tea Rooms or a dog-friendly pub, it's the law!

This weekend also sees me start another stint of twice daily cat visits, this time to little Phoebe who is quite an elderly cat but sweet nonetheless.

That's about our lot for this week so as always, I would like to wish you a happy and relaxing weekend with your furries.  Thank you again for all your support and indulging me in my doggie drivel.

Tweet
How do you feel about this post?
Happy (0)
Love (0)
Surprised (0)
Sad (0)
Angry (0)
A Houseful Of Hounds
Thunderbolts, Birthdays & Bassets

By accepting you will be accessing a service provided by a third-party external to https://furrydogmother.co.uk/