What's A Day In Dog Time? 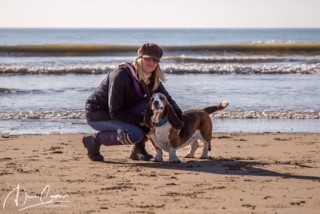 So it came, the result I'd feared, cancer.......and it's angry cancer. Why? Why my dog? Why now? Why him? I've been through a range of different emotions since that awful phone call from the Vets. Shock, upset, anger but the worst was wanting something or someone (namely myself) to blame. Was it something I'd fed him? Something I'd exposed him to? To be honest, I'm not sure it would have made me feel any better if the Vet had said "yeah the reason he's got this cancer is because you've been giving him coconut oil" but, it's human nature I suppose to want a reason. Somehow just bad luck is so hard to accept.

Now what? Now we have that information what do we do? The answer is that he has to have this tumour cut out because it's growing too quickly. We have however made the decision with Vet agreement that we are not going to put him through chemotherapy and radiotherapy. For no other reason than it is likely to only extend his life by a couple of months. I also don't want him to go through that because I've seen what Chemo does to humans and despite the Vet saying it isn't the same for dogs, how do they know? It's not like a dog can get up one morning and tell you they're having a bad day or feeling a bit sick. No, I want him to end his life in the most dignified way possible, not being sick. Of course I would never allow him to suffer for my own gain but, I don't want to send him to the Bridge hating me for putting him through endless Vet trips and pumped full of poison. 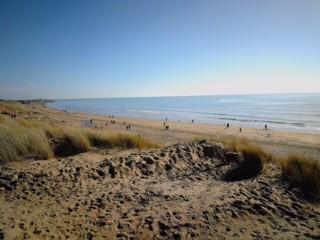 We don't know how long we've got left but we're going to make the most of every day and when it's his time to go, he's going having lived a wonderful and happy life.

So we decide the recent change in weather and that bright yellow thing in the sky appearing that this weekend, we should take a hound trip to Camber Sands. Somewhere we've been meaning to take them for the last couple of years but Buddy's diagnosis has somehow kicked us into acting. Off we set.

After a one and a half hour drive, we arrive and the tide is perfect. Not all the way out but gradually coming in. Still a vast amount of soft sandy shore and dunes to walk on and no shingle! If it wasn't for coats and wellies, it could of easily been mistaken for July. So many people and their dogs, sun beaming down, clear blue sky and sea as calm as a millpond.

It was like Crufts had gone for a day out to the seaside, almost every breed you could think of enjoying a run around on the sand and a dip in the sea. True to form Peach finds a tennis ball and claims it as hers for the rest of our walk. 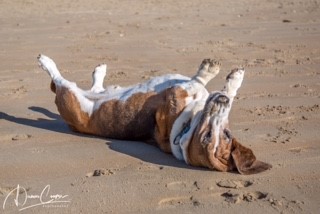 We bump into another beautiful Basset Hound called Sebastian. He was a real stunner although had much longer legs than our guys. 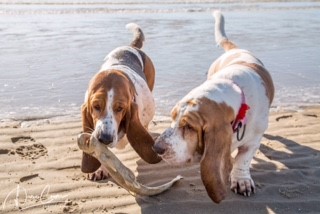 Daisy manages to find a stranded fish which she quite fancied taking back for lunch. With some gentle persuasion she leaves it behind.

Looking at Buddy-Love, you wouldn't believe there's anything wrong with him. Especially when he decides to sprint off in the direction of a young family sitting on the sand on some towels. We go after him but didn't realise they had any food until he launches himself on the poor unsuspecting mother and grabs himself her ham sandwich, foil and all! It was almost like his last hurrah! As if he's saying "see you're going to miss this!" Nice one Bud, how to bring our stroll to an abrupt end.........back on the leads and we head off.

We then get out for a little stroll around Rye Harbour and it's so warm, coats are left in the car! Crazy for the 17th February and very welcome indeed.

Heading back towards home we come across a little Tea Room and Farm Shop in Icklesham with a huge sign outside saying "Dogs Welcome" which is always a pleasing sight. 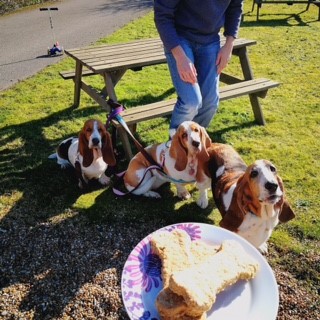 Amazing that it's so warm we can sit on one of the outside benches in the sunshine with no coats again. Daisy decides to step up as if to remind us that she can replace Buddy The Food Thief by striking out just centimetres from grabbing Mr Furry's bacon sandwich off his plate! We both say if that had been Bud it would have gone so Daisy needs to work on her technique! I wouldn't mind but, they'd literally just demolished a homemade doggie flapjack each!

This was a lovely day out and making the most of whatever time we've got left with our boy.

We've made a mental Bucket List for Buddy-Love so he can tick off Camber Sands now. I'm sure his Bucket List includes stealing sandwiches and ruining picnics. My argument.........if you're going to go to a dog-friendly beach on the first sunny weekend of the year, don't set up a picnic in the middle of the sand and expect not to share it! Especially with the lesser spotted Great White Basset Shark on the loose!

I'd like to take this opportunity to thank every person who has emailed, messaged, text or commented on my Facebook posts for all their empathy and thoughts. Some of whom are total strangers. I have been overwhelmed by it and I'm truly grateful. It seems my boy has had quite an impact.

My final thought................how long is a day in dog time? If one of our years equals seven of theirs, is a day like a week's holiday? I hope so because if that's the case, my boy has had loads and I hope, a few more to come. #buddylovesbucketlist

Welcome To The Year Of The Pig

They're Much Bigger Than I Thought....

The Nights Are Drawing In

By accepting you will be accessing a service provided by a third-party external to https://furrydogmother.co.uk/